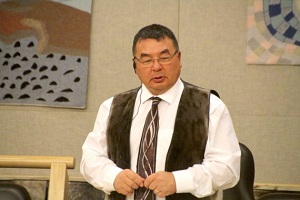 As reported by Nunatsiaq News, the Nunavut Housing Corp.’s rent scale, which determines how much tenants pay, based on their income, should be reconsidered, says Cathy Towtongie.

The MLA for Rankin Inlet North–Chesterfield Inlet made the demand in the legislature on Monday, Oct. 21, while pressing for a review of the territory’s housing program.

Problems with overcrowding, the high cost of living and poor housing conditions persist in the territory under the current public housing program, she said.

Patterk Netser, the minister responsible for the Nunavut Housing Corp., responded: “We don’t have a five-year review program.”

This action, among a list of 60, is geared towards looking at alternative models for subsidized housing to replace the current rent-tied-to-income model.

It goes on to say the housing corporation will look at options like co-ops and community land trusts, which allow for collective ownership among tenants.

“Can the minister update the house today on the specific actions Nunavut Housing Corp. has taken to accomplish this goal?” she asked.

Netser responded that the action plan on housing will take years to implement.

“It’s a work in progress and I can say we are working today on the 60 items of the program,” said Netser.

He added that the state of individual housing units is taken into account and, as of late, the housing corporation has readjusted the rent on units that were in particularly bad shape.