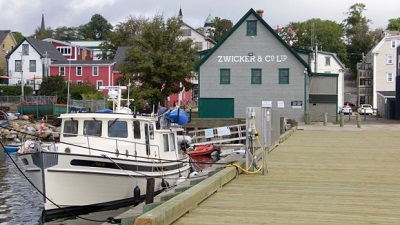 As reported on CBC News, in a town as rich with resplendent historical buildings as Lunenburg, it’s easy to walk past Zwicker’s Wharf Warehouse without a second glance.

But the three-storey wooden structure is an important part of the waterfront, according to the Crown corporation responsible for it. That’s why the corporation and the province are hoping to breathe new life into the space.

“The Lunenburg waterfront is a really important part of Lunenburg, and along the waterfront the Zwicker and Co. Building is certainly among the most prominent,” said Jennifer Angel, president and CEO of the Waterfront Development Corporation, which owns the building and the wharf it sits on.

The warehouse, as well as the original wharf and adjacent buildings, which are now gone, were the headquarters for a pioneering transatlantic shipping company that once included a fleet of 12 brigs. The two-masted sailing vessels carried lumber to England in exchange for tea, dry goods and hardware.

The warehouse has been home to more modest ventures since those days of iron men and wooden ships, including the building’s last tenant, Lunenburg Forge and Metal Works.

The building has been mostly empty since 2007, when the iron works moved out, although the nearby Fisheries Museum of the Atlantic has used the space for storage.

The province is hoping the $500,000 it recently spent on improvements to the wharf, as well as work this year to stabilize the building and install a new metal roof, will entice a business or businesses to once again occupy the building.

That has been a long-standing dream of the province.