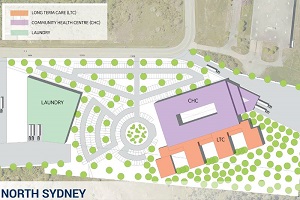 While he said earlier this year that public-private partnerships guarantee budget and time in construction projects, Transportation and Infrastructure Renewal Minister Lloyd Hines now says it was a desire for expediency that ultimately led the province to embark on a traditional design-build process for two new Cape Breton health centres.

During a post-cabinet scrum and conference call with reporters on Thursday, Hines was peppered with questions about his department’s decision to reverse course on its previously announced plan to pursue P-3 arrangements for the health-care centres to be constructed in North Sydney and New Waterford.

While the earlier announcement was communicated by press conference, the reversal was made public in remarks by Deputy Minister Paul LeFleche at a conference on public-private partnerships in Halifax on Tuesday.

Hines said the department had been considering its options and noted it is already committed to the largest P-3 project in the province’s history with the QEII redevelopment in Halifax, with preparations also underway for a P-3 involving Highway 104. Many resources are tied up in those developments, he said, adding it’s been decades since the province constructed a health facility, as that responsibility had devolved to health authorities.

“The P-3 option is one of the tools in the toolbox and it was decided that, in the interest of expediency, in getting the job done — that’s our commitment to the citizens of Nova Scotia, to provide good facilities for health care and certainly in Cape Breton that’s required — that we would be able to reach that objective quicker by using our conventional design-build arrangement,” Hines said.