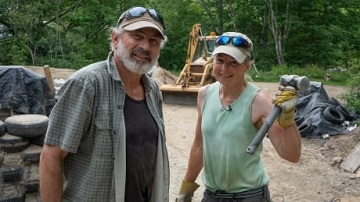 As reported on CBC News, Pippa Creery and Bob Kloske’s retirement involves a lot of dirt.

The couple are building an earth berm tire house, which they hope will be a little piece of paradise in Ship Harbour, on Nova Scotia’s Eastern Shore.

The south-facing home will have a wall of windows to capture sunlight, as well as solar panels on the roof. They’re building it into an embankment in the hope the dry earth will serve as insulation and store thermal energy much like a battery.

The off-grid design is modelled after an Earthship, a style of sustainable homes developed by American architect Michael Reynolds in New Mexico. It’s one of a handful of similar projects in the Maritimes.

“What appeals to me about this home is once it’s built and up and running, it doesn’t require any resources to maintain itself,” said Creery.

Creery said in traditional builds, the air must be heated, meaning it’s a crisis when the power goes out on a cold day. In this type of home, the structure holds the heat.

“You’re building up heat storage in all the tires and the dirt and the floor. The house will basically take care of heating and cooling itself,” she said.

A Halifax-based engineer interested in sustainable building took on the project and helped the couple ensure they had the necessary permits.