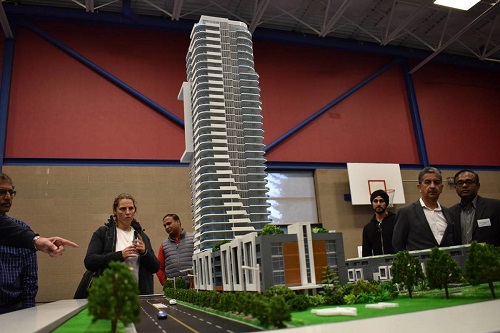 North Delta highrise application updated ahead of second round of consultation

The proposed development at 75A Avenue, 119A Street and 120 Street will be discussed at a public consultation at Sungod Recreation Centre on Nov. 29 from 5 p.m. to 8:30 p.m.

The application remains almost the same as it was on Sept. 22 during the first meeting, except for the creation of a new access lane off Scott Road.

The original development application featured 35-storey highrise on the corner of Scott Road and 75A Avenue, plus 16 townhomes along Scott Road and 10 more bordering 119A Street. Underground parking would be available for residents and only accessible from 199A Street.

Attendees at the first information meeting expressed concern about the impact additional cars would have on the residential streets, with one residents saying traffic along 119A Street would be a “damn disaster” with the new development. At the time, director of engineering Steven Lan said he would be taking residents’ comments into account as the proposal moved forward.

Keep reading in the Surrey Now-Leader