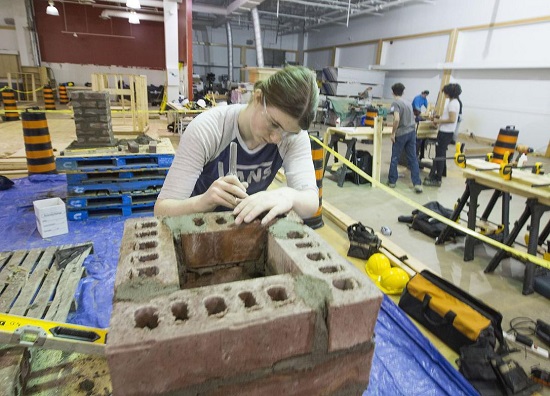 He was one of about 120 students who competed in the 19th annual event at Seaway Mall Wednesday and Thursday, held in person for the first time since 2019.

Several other students competed in events at various secondary schools — outside the 10 trades students showcased their skills in at the mall during competitive action Wednesday — before an award ceremony Thursday.

Goulding, who earned bronze in the electrical installation event, said he was pleased to participate in the competition not only to showcase his abilities, but to take another step in his projected career path of becoming a certified electrician.

“It’s good to show your skills, show people what you’ve got, practice your trade, and see if you like it or not,” he said, also referring to today’s vast opportunities in secondary curriculum to develop in the trades.

Grade 11 Notre Dame College School student Garrett Deschambault said he comes from a family of tradespeople. He said his interest goes beyond what he learns in school and at Niagara Catholic’s Launch Centre, a hub where students have hands-on learning in mechanics, transportation, construction, manufacturing and engineering.

He said he’s “really involved in the trades” and that it’s “fun to get out and put our skills to the test,” before learning he had won gold in the home-building (team of four) category with Ryan Potts, Gavin Hill and Braydon Snider.

Frank Mauro, a construction technology teacher at Notre Dame who works with students from across the board at the launch centre, said the decision to hold the competition in person again was made on “short notice,” but everyone was thrilled to hear the decision.

Keep reading in The Standard