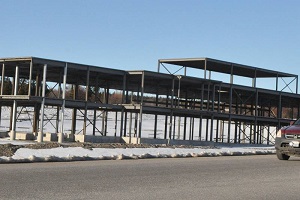 Newfoundland and Labrador commits $13.6 million to complete construction of the College of the North Atlantic’s Motive Centre in Stephenville

While $13.6 million was announced in Tuesday’s provincial budget for the College of the North Atlantic’s Motive Centre in Stephenville, MHA John Finn said it is part of money that was previously announced in September 2016.

The Motive Centre is a Centre of Excellence for Heavy Equipment Industrial Trades, which was started in 2017 with the steel framework carried out.

Finn said the money was allocated in this year’s budget because it’s this year that the continuation of the project will take place.

The original announcement was for $18.5 million, with the federal and provincial governments each putting in $9.25 million.

The tender for this year’s work has been let and will be awarded to the winning bidder sometime during the first week of April, and work should start shortly after that, Finn said.

Keep reading in the Western Star