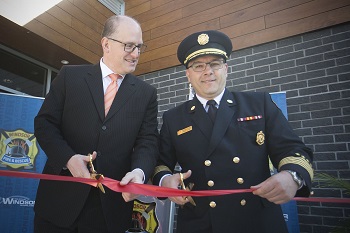 Windsor fire officials say the city’s newest fire hall is designed to be a “post disaster” structure that can be relied upon to function in the face of a variety of emergency events.

Construction on the facility began in August 2016 and was substantially completed in October 2017.

The 9,644-square-foot building was designed by NORR Architects and constructed by Amico Design-Build Inc.

The facility’s design is based in part on Matthew Brady Boulevard’s Fire Station No. 7 and continues a city-wide improvement process that was initiated in 2014 with a goal to enhance emergency services across the community.

“The safety and security of our residents is of paramount concern to me as mayor and to my colleagues on City Council,” said Dilkens. “While our old facility on Cabana served us well for many years, it was located a significant distance away from many of the homes and businesses that it needed to serve.”

Building upon experience gained from the recent construction of Stations 7, 2 and 6, the new No. 5 includes three truck bays and living quarters for up to nine firefighters and three captains. An equipment extractor to remove toxins has been installed at the location as well to service platoons from all western fire stations.