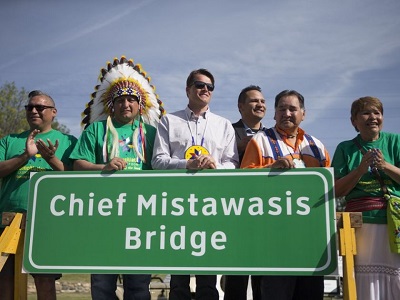 Having the name of Chief Mistawasis applied to Saskatoon’s new commuter bridge is a big improvement from the way Indigenous people were regarded when Roseline Daniels was a child at residential school.

“It’s like we’re coming together. We are, you know. There’s no longer the Indians one side, the whites one side,” Daniels said Thursday at the National Indigenous People’s Day event where the bridge name was announced.

It was chosen by a committee of Indigenous representatives and city leaders from the Reconciliation Saskatoon network who considered nearly 500 suggestions. Their intention was to answer the Truth and Reconciliation Commission’s call for governments to commemorate Indigenous people’s contributions to Canadian history.

The bridge name recognizes Chief Mistawasis, a northern plains leader known for his hunting in what is now the Saskatoon area and also for his role in the 1876 Treaty 6 negotiations.

The TRC’s 2015 final report documented how the spirit and intent of the treaties was long violated through government practices, including the residential schools, where children, separated from their parents, suffered emotional, physical and sexual abuses.

“The nuns and priests in Duck Lake made sure that we knew we were savages, that we’d never learn,” she said.

Ironically, it was the nuns at Sion Convent in Moose Jaw and some non-Indigenous students there who helped Daniels to reject the racist labels. The nuns were kind and the other girls admired her intelligence and sought her help with school work, she said.

“That sure started to make me feel good … I was on a healing journey and I started feeling better about myself.”

Daniels earned an Education degree and taught for 40 years, including at residential schools after First Nations took control of education for their children.

“We have so much to offer the non-native people. They didn’t know what we went through at residential school. They never knew. Now we’re sharing our stories, it really is awesome,” Daniels said.

“It’s awesome seeing our own chief’s name being used in the city … I’m proud to be a member of Mistawasis Nehiyawak community.”

Keep reading in the Saskatoon Starphoenix