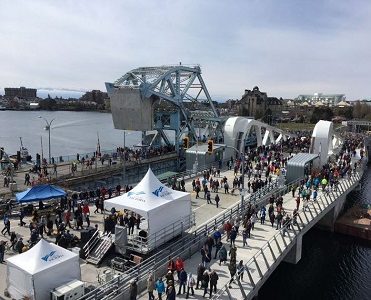 It’s a bridge for the next 100 years, a modern design that might one day carry self-driving, fuel-free cars.

“This bridge will last for generations,” Victoria Mayor Lisa Helps said Saturday as she officially opened the new Johnson Street Bridge, a project a decade in the making.

Thousands of people gathered to take the first steps across the new link between downtown Victoria and Vic West.

“I think today is really a day of celebration,” she said. “It’s a day of looking at what does the next 100 years in Victoria look like with this bridge as our anchor?”

Helps cut a big, blue ribbon bearing the words, “Opening day, March 31, 2018” and held by Victoria councillors, mayors from across the region, engineers and project managers.

A horn sounded and the bridge was lowered to allow the crowd to stream across, led by a vintage 1924 fire truck from the same year the old bridge opened.

People walked and cycled across the pedestrian bridge over Esquimalt Road, then looped back to the old bridge, where picnic tables were set up under a spinning disco ball, and took in the music and activities.

Next to the blue bridge, rusting and lacking a fresh coat of blue paint due to its pending demolition, the new bridge appeared sleek and streamlined. The bridge’s one-of-a-kind design led to some problems, however: a higher price tag — now at $105 million, up from $63 million in 2009 — and a later opening date. It was originally scheduled to be completed in September 2015.