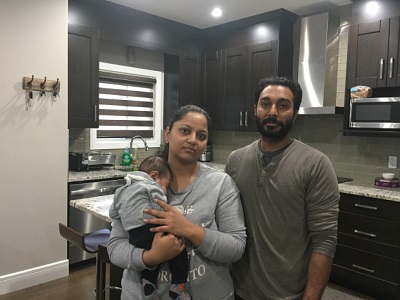 An Edmonton man is urging other home buyers to be cautious after unresolved issues turned his family’s new home into a nightmare.

“It’s not a dream home anymore,” Jaspreet Noorpuri said in an interview. “We don’t even call it a home. We call it a house — a place where we come and sleep.”

Since taking possession of the house nine months ago, Noorpuri and his wife Richa Shota have discovered multiple problems, ranging from electrical issues to a lack of insulation in the attic, despite an occupancy permit granted by the City of Edmonton.

“We noticed that our upstairs bedrooms were like freezers,” Noorpuri said. “How can the city say that this house is livable?”

The problems started when the two-storey, 1,710-square-foot home in the Laurel neighborhood of southeast Edmonton wasn’t ready for the agreed move-in date in late April 2017.

Noorpuri says he hadn’t been notified that the $420,000 home wouldn’t be completed in time. He and his wife were able to move in by May 4.

In November, Noorpuri was in the basement when he saw sparks coming from an electrical wire that had a nail through it. Concerned for his family’s safety, he turned off the breaker. Since then, half the house has not had electricity, he said.

In December, water from melting snow on the roof poured into the home, damaging the floors and ceilings. Water seeped through two ceilings and dripped down a light socket in the family room. Noorpuri, who has a background in engineering, suspects the water entered through vents in the roof.