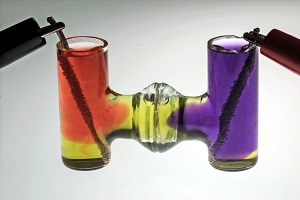 As blogged on New Atlas, as the most widely-used building material in the world, it’s no surprise that making cement is one of the single biggest contributors to our carbon emissions problem. MIT researchers now claim to have developed a new method that can clean up the cement production process, removing most of the carbon emissions without affecting the resulting product.

Portland cement, which is the most common type, is made by grinding up limestone, mixing it with sand and clay then cooking it at extremely high heat – up to 1,450° C (2,642° F). Not only does the energy used to heat the mixture produce huge amounts of carbon dioxide, but the greenhouse gas is also released by the limestone itself during this process. In all, that means about 1 kg of CO2 is released for every kilogram of cement produced, which adds up to a staggering 8 percent of global CO2 emissions.

While it’s been argued that concrete eventually sponges up much of the CO2 emitted during its production, it still wouldn’t be a bad idea to try to clean up the manufacturing process. Researchers have experimented with changing ratios of ingredients, developing new “geopolymer” recipes, or replacing cement with environmentally-friendly composite binders.

The problem with all of those ideas is that the end result is a different type of concrete. And the building industry may be reluctant, at least at first, to start using a different material. So the researchers on the new study focused on improving one step of the regular process, making plain old cement greener without having to change the material itself.