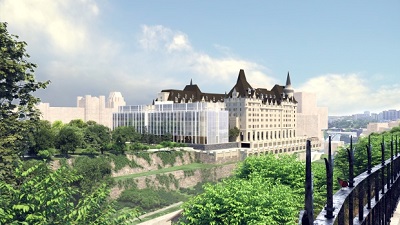 Developers have unveiled new design plans for the Château Laurier addition after the original plans sparked fury among Ottawa residents.

The new addition to the hotel, which opened in 1912 and was declared a national historic site in 1980, will replace a crumbling 5-storey parking garage that’s set for demolition.

According to a news release, the public consultations sparked “a totally new approach” to the design. The new plans consist of an 8-storey pavilion with 171 new guest suites, and will use materials such as white steel and glass.

The distance between the original building and the new addition has also been increased, jumping from 5.9 metres to 18.35 metres. According to the press release, the increase will “allow for the two to be distinctly separate.”

Dennis Jacobs, a principal planner at Momentum Planning and Communications, said designers wanted a building that could be “visually separate” from the original hotel.