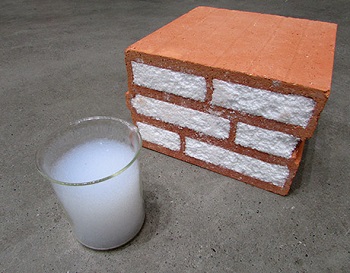 Most homeowners looking to lower heating or cooling costs know the drill. First thing to do is ensure the house is properly insulated, typically by rolling down a layer of the pink fiberglass stuff or having a fluffy version blown into their home’s walls.

But here’s a relatively new idea: Instead of adding insulation, build the structure from bricks already stuffed with a material known for its thermal conductivity. The bricks do-away with extra layers of insulation and decrease the thickness of a wall.

The building industry has begun to incorporate internal-insulation walls using insulated bricks and panel systems that use materials like perlite, mineral wool, or polystyrene as insulators.

Now, scientists at Swiss research group Empa claim they’ve created the best insulating brick of the bunch. It uses a different insulating material than the rest: aerogel, says Jannis Wernery, who led the project. He’s a scientist in Empa’s Building Energy Materials and Components department, part of The Swiss Federal Laboratories for Materials Science and Technology.

A wall constructed from the aerobricks conducts heat up to eight times better than one made from standard clay and shale bricks, Wernery’s group has shown.

Keep reading this blog on ASME.org