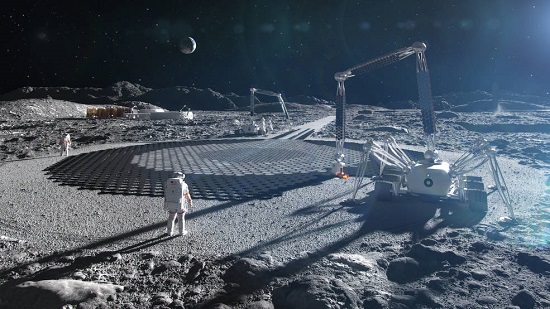 As NASA plans for long-term human exploration of the Moon under Artemis, new technologies are required to meet the unique challenges of living and working on another world.

NASA has awarded ICON, located in Austin, a contract to develop construction technologies that could help build infrastructure such as landing pads, habitats, and roads on the lunar surface.

“In order to explore other worlds, we need innovative new technologies adapted to those environments and our exploration needs,” said Niki Werkheiser, director of technology maturation in NASA’s Space Technology Mission Directorate (STMD). “Pushing this development forward with our commercial partners will create the capabilities we need for future missions.”

The award is a continuation of ICON’s work under a Small Business Innovation Research (SBIR) dual-use contract with the U.S. Air Force, partly funded by NASA. The new NASA SBIR Phase III award will support the development of ICON’s Olympus construction system, which is designed to use local resources on the Moon and Mars as building materials. The contract runs through 2028 and has a value of $57.2 million.

The award will build on ICON’s commercial activities and other work with NASA.

ICON also competed in NASA’s 3D Printed Habitat Challenge. The company partnered with the Colorado School of Mines in Golden, and the team won a prize for 3D printing a structure sample that was tested for its ability to hold a seal, for strength, and for durability in temperature extremes.

MMPACT is part of the Game Changing Development program within NASA’s STMD.