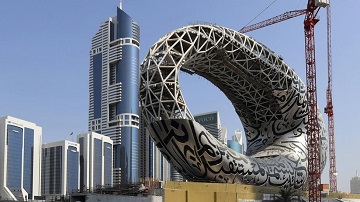 Museum of the Future – The building designed by an algorithm

In Dubai, where tower blocks seem to pop up almost overnight, residents have grown adept at averting their eyes from building sites. But one construction project has caught everyone’s attention: the Museum of the Future, which has loomed up over the city’s elevated, driverless metro system on the edge of the financial district.

The museum’s framework, comprising 2,400 diagonally intersecting steel members, was completed in November 2018; the facade panels now are being lifted into place. The museum is due to open in a year – a momentous time for Dubai as it will be hosting the World Expo from 20 October 2020.

The architectural world defines the futuristic shape of the museum as a torus with an elliptical void, but a giant hula hoop might be a more accessible point of reference. Lath Carlson, executive director of the Museum of the Future, prefers to liken it to an eye. “We struggle a bit to describe the building to people who haven’t seen it,” he admits. “There is nothing that quite evokes the shape.”

Local architectural firm Killa Design, which won the design competition for the museum in 2015, came up with the shape. According to the architect, the solid part of the structure represents the knowledge that we have today. The void represents all that we do not yet know – in other words, the future.

It is not just the unusual profile that marks the building out from the hundreds of other construction sites across the emirate. As each panel of the facade is fixed in place, more of the Arabic calligraphy that will adorn the exterior of the 78m-high museum comes into view. The museum directors have not yet revealed what the words say, but it is known to be phrases of poetry written by Dubai’s ruler Sheikh Mohammed Bin Rashid Al Maktoum, who is also the vice president and prime minister of the United Arab Emirates. The cursive scripts double as the windows of the museum. By day, they cast dappled light throughout the column-free interior; at night, they will be illuminated to dramatic effect by 14 kilometres of LED lighting.