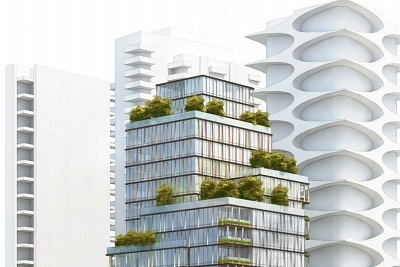 As reported in the Vancouver Courier, a 33-storey residential tower whose design, the architect states, is inspired by mountains is proposed for 1698 West Georgia at Bidwell Street.

The rezoning application for the high rise, which would feature 127 condo units, goes before an open house April 9.

If approved, the building would replace a Chevron gas station that used to be on the site. It closed March 29, 2017, two days before Anthem officially took ownership of the property. The property was assessed at $98,251,400 as of July of 2018, according to B.C. Assessment. The previous year, it was assessed at $65,500,000.

The application, which is being considered under the West End Community Plan and Rezoning Policy, cites the mountains of Vancouver as the inspiration for the design.

“The bold formation of rocks creates rugged structures, feathery trees lace over the ridges and the terraces, and the facets and the cracks in the rocks create an ever-changing interplay of light and shadow,” the design rationale explains. “Our design is inspired by the balance between boldness and subtlety of the mountains, aiming to bring a sense of nature to the convenience of urban living.”

Keep reading and see more images in the Vancouver Courier