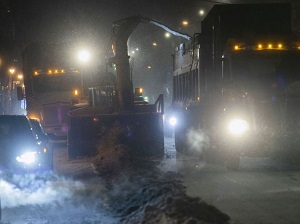 As reported by the Montreal Gazette, Montreal is barring a sub-contractor for five years for adding plywood panels to his truck to make the loads of snow it was carrying appear larger.

The city’s Inspector General (BIG) exposed the fraud by Entreprise Sylvain Choquette Inc. in graphic detail in a 13-page report tabled in city council on Tuesday.

It was the second time in four months the city has barred a company from bidding on snow-removal contracts. In June, it cancelled its contracts with Transport Rosemont after the BIG revealed the company had sent hundreds of half-full trucks to the city’s dump sites last winter while charging for full loads.

Photos taken by a city camera at the site where Choquette’s truck dumped its loads of snow during the winter of 2018-19 show it did not have the additional panel on the back of the truck when it was carrying out snow-removal contracts. But when Choquette took the truck to be measured on March 19, the extra panel had been added.

Snow-removal contractors often add a panel to one side of their dump trucks to prevent snow from being sprayed on parked cars when it’s being loaded onto the trucks, the report explained.

Choquette’s truck already had such a panel, but when he took the truck to be measured, a much bigger one had been added. It increased the truck’s volume from 42 square metres to 56 square metres, which increased the hourly rate for snow removed from $111.02 per hour to  $135.83 per hour.

“Even though it was unsophisticated, the maneuver made by Sylvain Choquette on March 9, 2019 leaves no room for interpretation,” Inspector General Brigitte Bishop wrote in the report.

“Such actions can not be tolerated,” she added.

In fact, the city paid Choquette the lower rate, not the higher one he claimed, because the department that co-ordinates snow removal with the boroughs flagged the incident.