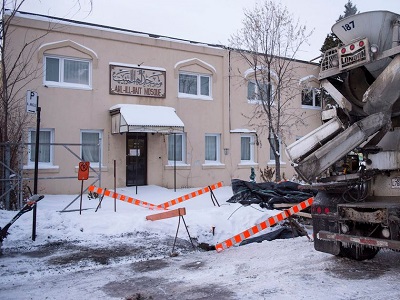 The head of an organization overseeing electrical work near two mosques in Côte-des-Neiges said there’s no contract barring women from working on the construction site on Fridays, the Muslim day of prayers.

“We never received any request from the mosque or anyone else to remove women from the work site,” said Serge Boileau, director of the Commission des services électriques de Montréal, which is responsible for installing underground electrical cables in Montreal.

Boileau was responding to a controversial report on TVA Nouvelles claiming that mosque officials had forced both an excavation company, G-Tek, and the signals company working for them, Map Signalisation, to make sure only men would be working on the construction site outside the mosques on Fridays.

In the report, G-Tek is said to have a written contract that stipulates the unusual condition, though the contract is not presented.

Boileau said there are many “falsehoods” in the report, adding that he’s confused about why people are saying such a contract exists.

“There’s a lot of confusion and it’s very bizarre,” Boileau said of the controversy.

TVA never called the commission before broadcasting the report, he said.

A commission employee in charge of inspecting the work on de Courtrai Ave. is a woman and she has never heard of the request either, he said.

Boileau said he’s surprised that his organization has been dragged into the controversy, which has snowballed since the report was first broadcast on Tuesday.

Quebec’s Labour minister has asked the Commission de la construction du Québec to investigate, the far-right group La Meute has called for a demonstration outside the mosques on Friday, and Quebec Premier Philippe Couillard said if the report is true, it would be unacceptable.