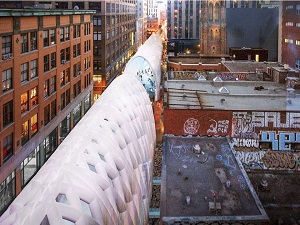 Montreal’s new leadership has cancelled the idea of placing a three-storey-high inflatable cover over Ste-Catherine St. first floated by the administration of former mayor Denis Coderre.

Presented as an audacious way to draw customers to Montreal’s main commercial strip while it suffers through four years of infrastructure work, the plan was for the large, inflatable structures to separate pedestrian traffic from construction upheaval and the elements and hopefully act as a draw for shoppers and tourists.

The total cost was pegged at $3.8 million. Architecture firm Kanva was awarded an $800,000 contract for the concept. The contest to determine the winning concept cost $170,000, and buying and installing the structures was estimated at $2.8 million.

Upon review, the administration of newly elected mayor Valérie Plante determined the structures would not do anything to speed construction work and could potentially slow it down. The main concern among merchants and businesses along the strip is that the work be completed as quickly and as cleanly as possible, Projet Montréal spokesperson Youssef Amane said.