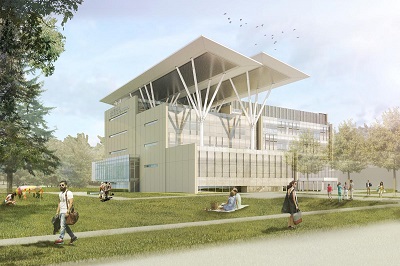 This fall, Mohawk College is making a statement about renewable energy by opening the country’s largest institutional net-zero-energy building. With highly visible rooftop solar panels, it will provide a home to engineering students while greening the grid.

The Joyce Centre for Partnership & Innovation is designed to operate without producing negative emissions, which means that for every kilowatt hours of energy used, a kilowatt of renewable energy is produced.

Three years in the making, the facility will be ready for the Hamilton-based school’s students in September, and is among several sustainable building projects set to open on college campuses in and around Toronto in the coming years.

“Everybody who occupies the building should see a benefit: students, researchers, teachers, administrators and parts of the public,” says Kevin Stelzer, a principal with B+H Architects, which was involved in the building along with firm mcCallumSather. “We’re going to pump a lot of green electricity into our grid so that people’s homes and workplaces will be less carbon-intensive, if they use electrical energy.”

The very nature of the 96,000-square-foot building, which will offer space for around 1,100 students, made the net-zero plan a challenge.

“As an engineering building, it has high-energy equipment, and it’s a high-occupancy building, so we have to ventilate it a lot,” he says.

To that end, labs containing sub-electrical panels have breakers that are triggered if a lab uses more energy than scheduled.

Construction on the $54.25 million Joyce Centre will be completed in mid-May and will connect to the existing engineering building. Solar panels installed on the roofs of the building’s wings will generate all the electricity the building needs. A geothermal field consisting of 29 wells dug approximately 600 feet deep will heat and cool the facility through a distributed heat-pump system. Additionally, its shape – almost an L configuration – will flood the interior with natural light, reducing daytime electricity loads.