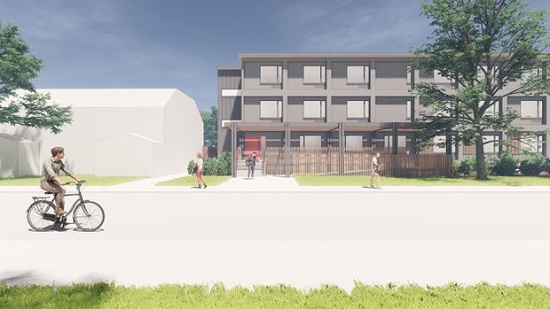 Modular housing eases into the mainstream

Compared to the normally sluggish pace of most construction projects, the development of two new City of Toronto affordable housing complexes will have a kind of don’t-blink-or-you’ll-miss-it quality.

The projects – one in the west end and the other in Scarborough, and both designed by Montgomery Sisam Architects (MSA) – will have 44 and 56 units respectively. Each 250-sqaure-foot studio contains a single main room, a kitchen and a bathroom, and is intended as housing for a currently homeless individual.

Their most distinctive feature, however, is mainly invisible: both are being built using “modular construction” techniques, with each apartment unit assembled entirely in a Grimsby, Ont., factory, transported to Toronto and craned into place like so many Lego blocks. From site preparation to occupancy this fall, they’ll each take about four months to complete, says Daniel Ling, a principal and director with MSA. A similar undertaking using conventional construction methods would drag on for 12 to 18 months, he adds. “It’s a very significant time savings.”

While these proposals, which received a green light from Toronto council this week, have been the target of some NIMBY grumbling, they’re also drawing attention to the potential for modular and prefab development in a city where construction sites, with all their familiar disruptions, can persist for years.

But besides speed, proponents of this approach also point to other benefits, including improved energy performance, smaller carbon footprints, reduced cost and more consistent quality control.

Countries such as India, China and Finland have shifted their construction sectors to far greater reliance on prefabricated building components, while in Hong Kong, local authorities won’t issue a building permit to developers who can’t demonstrate that some elements of their proposed projects are factory built, according to University of Alberta professor of construction engineering Mohamed Al-Hussein, who has advised on prefab apartments that were completed in weeks.