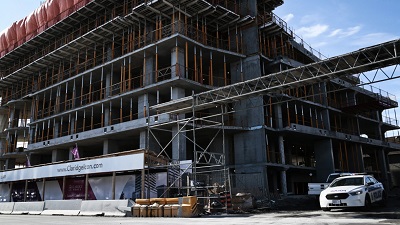 The Ministry of Labour ordered work to stop Friday after a man fell three metres from a concrete forming panel at a Claridge construction site on Preston Street — the same site where a worker died two years ago.

In a news release Monday, the ministry said it issued the order against the injured worker’s employer, Bellai Brothers Construction Ltd, after he was rushed to hospital with a head injury. He’s since been released, police said Saturday.

A ministry inspector and engineer visited the site following the incident.

Bellai Brothers has complied with an order to ensure construction materials are stacked to prevent tipping, but the stop work order will remain in place until the man’s employer installs a fall protection system at the site near Preston Street and Carling Avenue, where the Claridge Icon condominium is currently under construction.