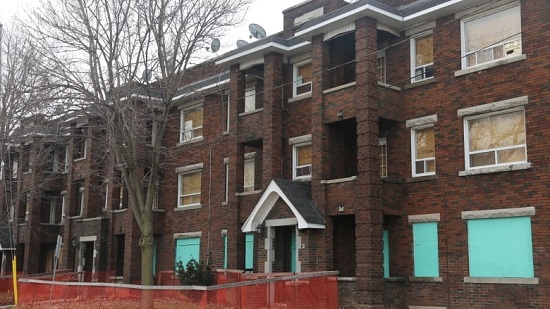 The work will begin this fall in order to reduce the risk of fire and “other potential hazards,” according to the Crown agency responsible for transit.

Advocates and tenants have called for the vacant buildings to be turned into affordable housing.

Sharon Miller, who still lives in a Metrolinx-owned duplex along King Street East, said Friday that the buildings between her and one of her few remaining neighbours will be pulled down, something she sees as an effort to get them to leave.

“A lot of the these buildings could be used for housing,” she said, adding that if she’s eventually forced to leave she believes she’ll end up living on the street.

“I sit on pins and needles every day,” Miller added.

Metrolinx spokesperson Anne Marie Aikins emphasized that no residents living in homes owned by the agency are being asked to leave, as long as they remain in good standing.

“We completely appreciate that this is a very difficult time for a lot of people given the pandemic,” she said.

Seven of the 60-plus properties the Metrolinx owns are currently occupied by residents, while five are being rented as commercial sites, she Aikins.

The agency wanted to be very public about its demolition plans in order to ovoid any “misunderstanding or fear,” she added.

Metrolinx notes the demolition is not connected to any particular transit project as Hamilton is still awaiting decisions arising from recommendations from the Transportation Task Force, which was set up after the provincial government cancelled the city’s LRT project.

Most of the buildings that will be knocked down have been vacant for more than a year, says Metrolinx.