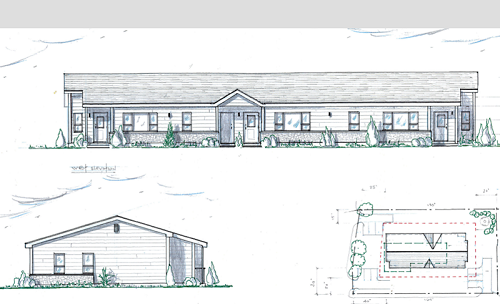 A new housing project at 30 Vancouver St. in Yarmouth is moving forward to address the housing needs of medical learners.

After much effort to make an existing building work, Coastal Financial Credit Union’s board of directors, supported by the Yarmouth and Area Chamber of Commerce, determined that the current house will be demolished and replaced by a new facility.

“The new building will fit very nicely in the neighborhood while complementing the lot and maintaining the current landscaping as much as possible,” says Kerry Muise, vice-president of the Yarmouth and Area Chamber of Commerce.

“The existing structure is old, and while stately from the outside, the cost of renovating far outweighs the costs of new construction,” Muise says.

Another consideration of building new was the ongoing maintenance and operating costs of the existing building in the long term.

The donation of the original house by the Coastal Financial Credit Union was first announced on Oct. 24, 2019, at the Yarmouth and Area Chamber of Commerce’s Business Awards ceremony. During the event at the Mariners Centre, Coastal Financial Credit Union CEO Rick Doucette had also encouraged other businesses to contribute in some way towards required renovations. By the end of the evening, donations in-kind were pouring in: a free kitchen design, an offer to fill the fridge, free paint, an electrical upgrade, landscaping and much more.

Some work took place on the building  during the next few months. However, it was discovered that while the large house has “good bones,” there was much that needed to be updated and reconfigured.