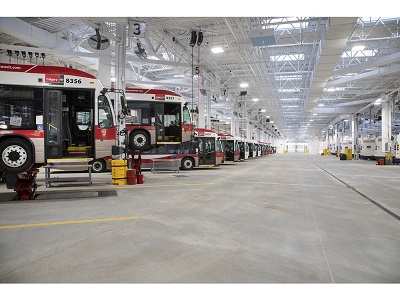 As reported in the Calgary Sun, a massive new storage and maintenance facility for transit buses fuelled by compressed natural gas (CNG) has officially opened in north-central Calgary.

Calgary has long needed more bus storage — the 44,300-square-metre facility will be the largest in North America — and with the shift from diesel to CNG, the city is hoping it will ultimately save more than $4 million in fuel costs per year.

“It saves money for the city, it protects us from the price volatility of diesel because we can lock in long-term natural gas contracts (and) it supports Calgary industry and shows the world another use for Alberta natural gas, which is incredibly important,” Mayor Naheed Nenshi told reporters Tuesday.

“And it reduces greenhouse gas emissions both through encouraging use of transit and through converting diesel to natural gas.”

The $174-million facility was designed and built through a public-private partnership with Plenary Infrastructure, which will maintain the facility for the next 30 years; funding was contributed by all three orders of government.

Following an initial order of 30 to 40 CNG-fuelled buses in 2018, the city has had to somewhat scale back its plan to purchase more CNG buses over the next four years due to budgetary constraints.

The city said buses will have to be used “past their optimum life” of 16 years and will incur additional maintenance costs, according to budget documents for 2019-22.

However, last week saw the province announce new funds to support the purchase of an additional 52 CNG buses in Calgary through the Alberta Community Transit Fund.