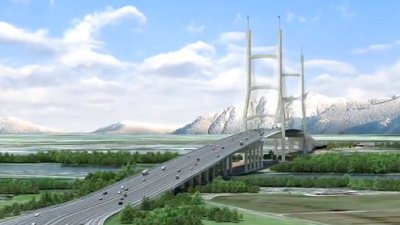 A new bridge to replace the Massey Tunnel could be much cheaper than originally thought, according to a report from Delta city staff.

The original estimate from the province to build a new 10-lane bridge was $3.5 billion.

However, the B.C. NDP said during the election campaign that leaked documents showed the total could be closer to $12 billion.

When the staff report was submitted to Delta city council last month, it told a very different story about what the final cost would look like.

“The low bid for the bridge construction came in well below the initial estimate of $3.5 billion at $2.6 billion, placing the bridge as the lowest cost option by a significant margin,” the report stated.

“Surprisingly, the potential savings of $900 million has not been widely reported.”

The province cancelled construction on the bridge in September and called for a review to explore the best options to upgrade or replace the tunnel, which was built in 1959.