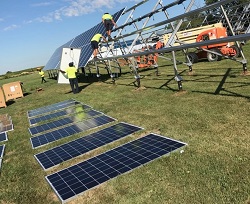 An incentive program that jolted Manitoba’s solar energy sector will return, but not until 2022 — which is too long, says one installer, to leave customers waiting to plug into a new provincial rebate program.

Manitoba Hydro was criticized in 2018 for ending the two-year pilot program without indicating what will replace it, if anything.

The utility left the future of the well-received program in the hands of a new Crown corporation called Efficiency Manitoba, which said in a recent report it would reinstate the incentive, but not before 2022.

A four-year gap without a rebate is discouraging, says Justin Phillips, CEO of Sycamore Energy, especially since the province wants to conserve energy.

“This is kicking the can down the road, and frankly, I think they could do better than this,” Phillips said.

Phillips says that gap will make it difficult for industry players who participated in the pilot project to continue.

“I think there’s a lot of well-meaning people with Efficiency Manitoba, with Manitoba Hydro, but they’re really playing it beyond safe,” said Phillips.

“This is really intended, as far as we can tell, to hit the reset button for solar in Manitoba, fully wipe the slate clean, flush out the companies who were doing it, who have been forced to leave the province or seek other means of revenue, and then start over.”

The new Crown corporation, devoted exclusively to energy conservation, filed its three-year plan last week to the Public Utilities Board, which detailed for the first time that Efficiency wants to launch a new solar energy program.

The report says Efficiency needs the first two years to research and coordinate with Manitoba Hydro, as a “solar PV [photovoltaic] program will have significant impacts on Manitoba Hydro staff workloads as well as the distribution system.”