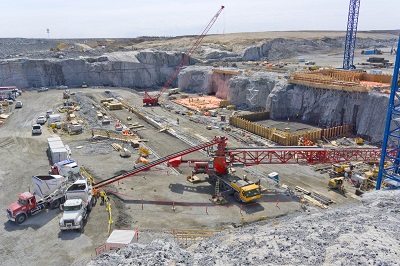 Manitoba power project behind schedule and over budget

WINNIPEG _ An independent review warns that the Keyask generating station currently under construction in northern Manitoba could end up costing $10.5 billion _ 62 per cent more than the budget set by the former NDP government.

A heavily redacted copy of the report by Calgary-based construction-cost consultants MGF Project Services also says the project may not be ready until 2022, more than a year behind its original completion date.

The report for Manitoba’s Public Utilities Board lays the blame for the delay at the feet of the contractor, BBE Hydro Constructors LP.

The contractor has not commented, but Manitoba Hydro rejects the conclusions, saying the dam will be ready in August 2021 at a cost of $8.7 billion.

The report on Hydro’s capital projects spending comes as the PUB hears the Crown utility’s application for an annual 7.9 per cent rate increase through 2024.

The report cites the contractor’s “poor productivity” stating: “Its performance is the largest single contributor to planned cost and schedule not being met.”

The MGF report says there was an amended agreement Feb. 28, but the contractor is “not meeting the revised productivity factors for concreting and earthworks.”

It notes Manitoba Hydro staff are competent and professional, but lack the skills and expertise to be construction managers.