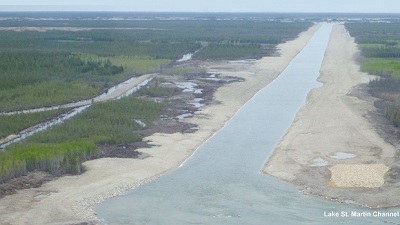 Manitoba’s construction industry is calling for more transparency after the province sole-sourced contracts to build an access road to Lake St. Martin and a channel to help alleviate flooding issues in the area.

The community in Manitoba’s northern Interlake was destroyed in the flood of 2011. Residents had to leave, and some have yet to return home.

An emergency channel was later excavated to reduce flooding pressures on the area.

“That’s not the way to manage public finances,” he said.

“It’s the competitive bidding process that tests the market to provide the lowest qualifying price upon which, in a transparent and accountable manner, the government can then award, and should award, the contract.”

Lorenc says this project should be no exception, as he’s been hearing from association members and the industry at large.

“Everybody is very disappointed that they were essentially excluded from the opportunity” to bid for the contracts, Lorenc said. “There should be no exclusive club that is entitled to a handout, and that’s exactly what this effectively becomes.”

Infrastructure Minister Ron Schuler said Tuesday that work would begin this year on the project, with excavation of the channels starting in 2019.

When asked during the announcement whether the contracts for the road and channel projects were tendered, he replied, “Yes, they have been tendered.”

But on Wednesday it was revealed that two partnerships, one involving Interlake Reserve Tribal Council with Sigfusson Northern and the other Lake St. Martin First Nation with Glen Hartman Construction, were awarded the contract without going through the tendering process.