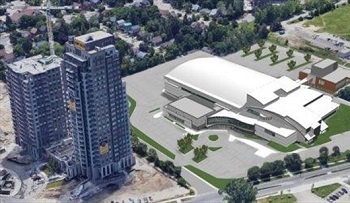 As reported in the Waterloo Region Record, construction of the $30-million expansion and retrofit of the Waterloo Memorial Recreation Centre is slated to begin in January and will take at least two years to complete.

On Monday, city council approved the release of more than $24.5 million in funding to go along with $5.6 million that has already been released. Construction is expected to wrap up in the summer or fall of 2022.

“Thank you to everyone who has been working on this massive project, I’m very excited about where it’s come to,” said Coun. Tenille Bonoguore, whose uptown ward is home to the facility.

The upgrades and improvements are aimed at providing more recreational activities and social programming for seniors and other city residents.

The first is a two-storey, 28,000-square-foot community pavilion on the west side of the property between the current rec centre and the Luther Village retirement home. It will be connected to the existing rec facility by an elevated pedestrian bridge.

The pavilion will be the new home of the city’s older adult recreation program (currently offered at the Adult Recreation Centre on King Street and the Wing 404 Rotary Centre on Dutton Drive) and other community space.