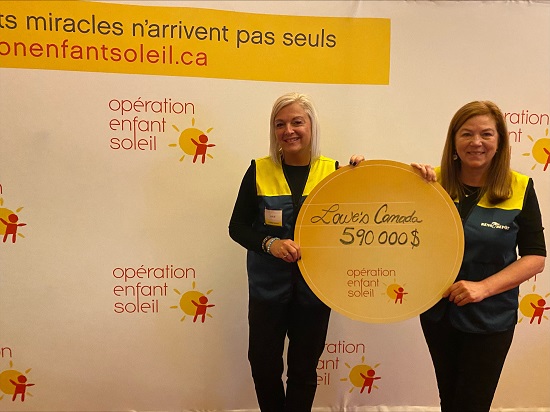 Lowe’s Canada, one of Canada’s leading home improvement retailers operating or servicing some 450 corporate and affiliated stores under different banners, has brought another successful campaign benefitting Opération Enfant Soleil (OES) and Children’s Miracle Network (CMN) to a close by unveiling part of its 2022 results at the OES telethon on June 5. Thanks to the commitment of Lowe’s, RONA, Réno-Dépôt corporate and participating dealer store teams, the customers’ generosity and donations from the vendor community, the network raised over $1,470,000 for both organizations this year.

“Over the past few years, it became clear that we all benefit from supporting the healthcare system in our communities. For this reason, we saw our teams again this year rallying around the CMN and OES campaign, not just because they wish to support their local hospital foundations but also to make a difference in the lives of their neighbours and give kids in their community a chance to chase their dreams”, said Mélanie Lussier, Director, External Communications and Sustainable Development at Lowe’s Canada. “At Lowe’s Canada, our purpose is to serve Canadians and their projects, whether it’s renovating their home or building a life not defined by illnesses, and we would like to thank everyone—–our customers, vendors and associates—who contributed to the great success of this year’s campaign.”

A meaningful campaign that gives back locally

This year’s campaign was even more meaningful to the Lowe’s Canada network since it was represented by two associates: Jessy Intine and her mother, Ramona Paul. When Ramona learned that her daughter had been diagnosed with cancer at the age of 7, she joined the Lowe’s Canada team to gain the flexibility she needed to be there for her family during this difficult time. Fast-forwarding 15 years later, Jessy is not only in perfect health, but she is also thriving as an Assistant Store Manager. “It is amazing to see our friends and colleagues sparing no efforts to support the cause and to know that we work for a company that is bent on making a difference”, added Jessy Intine.

The campaign took place from March 28 to May 8 in stores and online, and was extended until May 27 for the Pros on jobsites. All the funds raised will go directly to the foundations in the region where they were donated to support the work of 14 children’s hospitals and contribute to offering advanced care to children across the country.

Again this year, Lowe’s Canada has put its expertise and network in the home improvement industry at the service of the Maison Enfant Soleil as its official supplier of materials. Thanks to the generosity of 16 of its vendors and a corporate contribution, the network maximized its sponsorship and greatly contributed to minimize the house’s construction cost. In addition, participating stores in Québec sold raffle tickets to win the beautiful house built by Bonneville, and the combined efforts made it possible to present the $590,000 cheque.

Lowe’s Canada has been supporting the Opération Enfant Soleil and Children’s Miracle Network’s missions since 2018. Over the past five years, through unprecedented situations, the teams together with customers and vendors were able to raise over $4,7 million for children’s hospital foundations across Canada.

“Lowe’s Canada and its caring workforce have significantly helped to advance children’s health across Canada, joining in our mission to do what’s right for kids so they live their happiest, most fulfilling lives.”

A major unifying force for Quebecers around the cause of sick children, Opération Enfant Soleil has been supporting their recovery throughout the province regardless of their illness for 35 years. From raising awareness to prevention, through investigations, diagnosis, equipment used in treatments, and outpatient care at home, Opération Enfant Soleil supports children and their families every step of the way. With the funds raised, about 100 projects are carried out each year in hospitals across the province, where children can be cared for close to their families, as well as in large pediatric centres, which can be equipped with state-of-the-art technology and welcoming spaces. Sums are also donated to organizations each year to carry out over 50 projects related to preventive care for young people through physical activity and healthy lifestyle habits. To date, close to 288 million dollars has been distributed throughout Quebec thanks to the generosity of donors, volunteer support, and our partners’ dedication.

Children’s Miracle Network® raises funds and awareness for 170 member hospitals, 14 of which are in Canada. Donations stay local to fund critical treatments and healthcare services, purchase pediatric medical equipment, and support research. Its various fundraising partners and programs support our mission to save and improve the lives of as many children as possible. Visit our website to learn more about our cause. In Canada, Children’s Miracle Network is managed and operated by Canada’s Children’s Hospital Foundations®.

Lowe’s Companies, Inc. (NYSE: LOW) is a FORTUNE® 50 home improvement company serving approximately 19 million customer transactions a week in the United States and Canada. With fiscal year 2021 sales of over $96 billion, Lowe’s and its related businesses operate or service nearly 2,200 home improvement and hardware stores and employ over 300,000 associates. Based in Boucherville, Quebec, Lowe’s Canadian business, together with its wholly owned subsidiary RONA inc., operates or services some 450 corporate and independent affiliate dealer stores in a number of complementary formats under different banners, which include Lowe’s, RONA, Reno-Depot, and Dick’s Lumber. In Canada, they have more than 26,000 associates, in addition to approximately 5,000 employees in the stores of independent affiliate dealers operating under the RONA banner.