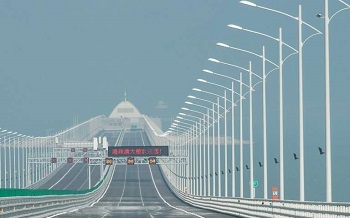 Nine years after construction began on the 55-kilometre (34-mile) crossing, a preview organised by the Chinese government this week offered a first peek into the megaproject.

The bridge will link Hong Kong to the southern Chinese city of Zhuhai and the gambling enclave of Macau, cutting across the waters of the Pearl River Estuary.

Although the opening date has not been confirmed, officials expect the bridge to be in use for 120 years and say it will boost business by cutting travel time by 60 percent.

The 420,000 tonnes of steel used for the project represent 60 times the amount used in the Eiffel Tower, China’s official Xinhua news agency said.