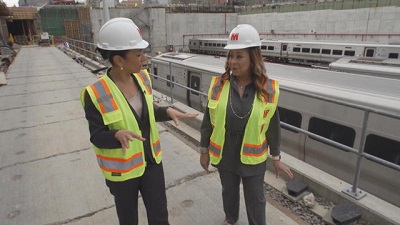 As reported in the Birmingham Times, the construction business is no bed of roses — cutthroat competition makes it hard to stay on top. But one construction and design firm has been making its mark on some of our biggest landmarks.

Cheryl McKissack Daniel now sits atop the oldest African-American-owned and female-run construction company in the nation — a business her family truly built from the ground up. In the male dominated world of construction, McKissack Daniel feels right at home — even in a hard hat and heels.

As president of McKissack & McKissack, she manages projects ranging from a park in downtown Brooklyn to getting many of New York’s trains to run on time. Her company is on board to revamp Long Island’s railroad hub, which runs underneath the Brooklyn Nets’ home.

In fact, McKissack Daniel’s business is assigned to just about every major infrastructure improvement project financed by the city and state, including the current construction at LaGuardia Airport and the new Terminal One at JFK.

McKissack Daniel says competing in construction’s big leagues “takes relationships, and getting people to realize that you bring value to the table something unique and different.”

Moses McKissack was taught the trade of making bricks by his Scottish slave master. The trade was passed down to her grandfather and great uncle, who incorporated the family business in 1905. Over the next 60 years, they built homes, hospitals, and colleges. McKissack said her grandfather built the Tuskegee air force base where black pilots trained to desegregate World War II.

Keep reading in the Birmingham Times