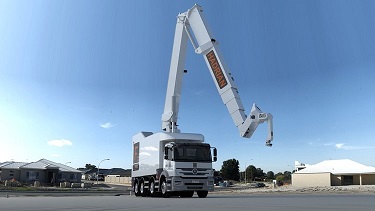 A look at a home-building robot that can lay more than 1,000 bricks an hour

A construction crew can build a small home in about four to six weeks. To shave time and labor costs, some homebuilders have chosen to automate part of the process instead.

A new robot, developed by Perth-based company Fastbrick Robotics, may be the speediest homebuilding machine yet.

Called the Hadrian X, it’s essentially one long robotic arm that mounts on a truck, barge, or crane. Operating from a 3D model, the machine cuts its own bricks and applies adhesive. Using a conveyor belt, it then feeds the pieces to the end of the arm, which lays them into place.

Later this year, Fastbrick plans to build its first house, which will include three bedrooms and two bathrooms. A human team will complete the structure’s finishes, including windows, doors, as well as electrical and plumbing systems.

During test runs, the Hadrian X has been able to construct the frame of a small house in as few as two days. The company is uncertain when it will start selling the machines.

Since the Hadrian X grinds and mills its own bricks, it can customize sizing so the pieces fit perfectly. The bot can handle bricks as large as 2,000 cubic inches, Chivers said. (For comparison, a standard brick typically measures about 115 cubic inches.)

According to Fastbrick, the technology could improve the speed, safety, and accuracy during construction — while lowering labor costs.