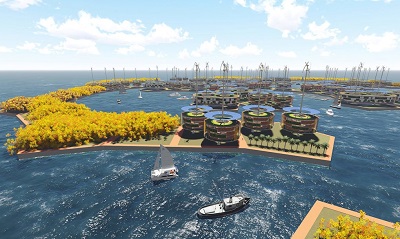 The world got a little closer to the first floating city when the Seasteading Institute signed a memorandum of understanding with the French Polynesian government earlier this year. Not only could floating cities offer a sustainable place to live, but they could also potentially help coral reefsrecover and provide a habitat for marine life, according to Joe Quirk, Blue Frontiers co-founder and Seasteading Institute seavangelist. Inhabitat spoke with Quirk and architect Simon Nummy to learn more about the vision for the world’s first floating city.

Quirk told Inhabitat, “We think of cities as being a blight on the land and polluting the oceans. Floating cities are so different because they could actually be environmentally restorative.” For example, an increase in ocean temperatures has caused much of coral bleaching. Quirk said the mere presence of a floating city could help combat this issue. He said, “The corals could actually recover if we could just lower the temperature a little. Our engineers at Blue Frontiers have devised a plan to position the platforms to create some shadows to lower the temperatures. So as the sun moves about, you get enough light on the ocean floor to spark photosynthesis, but you lower the heat just enough to have a restorative effect.”