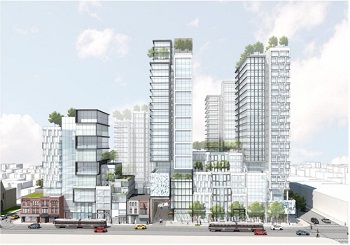 Toronto’s a city that grows north. That’s been true throughout its history, with density crowding its way along Yonge St.

But today, developers are looking west — with five large-scale, highrise condo communities underway along the city’s other major subway line.

The developments on and around Bloor St. W. are expected to create roughly 6,000 residential units — bringing in thousands of people — as they’re built over the next decade or more. They’ll re-shape communities, add spokes to the skyline, and they’re just the beginning.

“The density over Yonge has taken so long to get to where it is,” said Graham Haines, research manager at the Ryerson City Building Institute. While Yonge St. grew to host powerhouse towers emblazoned with bank logos and other major businesses, Bloor St. W. established more of a residential character that developers will now have to work around.

“I think to see that type of concentrated density along Bloor might be more difficult given … it’s a much more residential context than we see along Yonge St.”

The city has always been looking to develop along the major transit artery, Haines said, but developers had been focused downtown. They’re finally starting to look east-west as they run out of space in the core, giving an opportunity to spread out not only where people live, but also where they work.

Continue reading in The Toronto Star