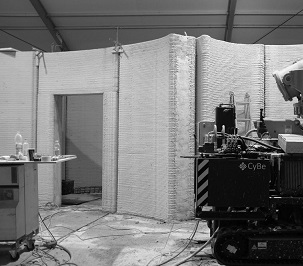 3D-printed architecture seems to have taken another step towards the mainstream, with the news that engineering firm Arup and CLS Architetti are collaborating on the first 3D-printed concrete house in the European Union. Named 3D Housing 05, the project was conceived to demonstrate the efficacy of the cutting-edge technology.

The prototype home is being constructed in Milan’s central square, Piazza Cesare Beccaria, and will be officially unveiled during this year’s Salone Del Mobile in April. The project also includes Italian cement supplier Italcementi and Cybe Construction.

Just like every other 3D-printed architecture project we’ve seen, the basic construction process involves extruding a cement mixture out of a nozzle layer by layer to build up the home’s walls. However, 3D Housing 05 makes use of a robotic manipulator mounted on a movable base for increased flexibility rather than the more typical static printer.

Once the machine has done its work, humans are then required to finish off the roof, windows, and doors, as well as any other finishing touches. An Arup representative told us that the company is hoping to automate this part of the process in the future too.