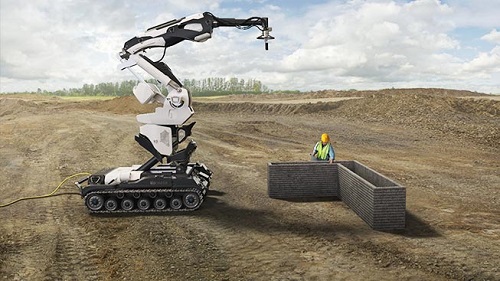 The construction industry sits at an interesting crossroads in 2017. One of the highest-grossing in the world – $10 trillion in 2016 – it is also one of the last industries to innovate technologically and one most desperately in need of doing so. Add on the fact that it’s the most dangerous in terms of workplace fatalities – 924 cases in 2015, the highest level since 2008 – *and* that it is now facing a shortage of skilled labor, and you have an industry that needs innovation and new thinking in pretty much every aspect.

The answer to almost all of these problems lies, of course, in our future robot overlords. Though the immediate reaction to autonomous equipment in construction is sometimes one of disdain – what about the jobs you’re replacing? – further examination sheds new light on the many benefits. Not to mention the fact that all of these automatons need humans in order to operate effectively.

It’s not hard to imagine a future where a building is constructed entirely in a digital world which people explore in virtual reality. Once everyone likes what they see, someone pushes a “build” button and the robot construction workers are dispatched to an empty plot of land (on Mr. Musk’s autonomous trucks of course) where they do what human construction workers do today when they arrive at a new site – smoke some weed, tell off-color jokes, and put in an honest day’s work like real men do. (Did you know that in Australia, the industry with the least amount of female representation is construction at 88.3% male? In the USA, women in construction are even fewer. So until we have equality, this one’s for all the lads out there pounding nails and breakin ’em.)

Let’s take a look at 8 startups developing cool futuristic toys like exoskeletons, mapping drones, and self-driving earthmovers that will propel the construction industry into the future.