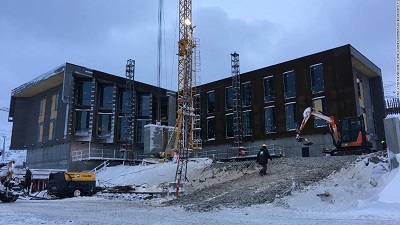 As reported on CNN.com, nestled into the stunning Arctic landscape with panoramic views of sparkling fjords and snowy mountains, Ny Anstalt could easily be mistaken for a luxury ski lodge. But this stylish complex in Nuuk, the capital of Greenland, is actually a prison.

As any onlooker can deduce, when it opens in 2019 it will not be a normal penitentiary. It will be a “humane prison” — a correctional facility that emphasizes rehabilitating criminals through positive design, rather than punishment.
Exponents of the “humane prison” philosophy believe that if prisons mimic the conditions of normal life, as far as is possible, offenders have a greater chance of successful reintegration into society, and less chance of re-offending.
Ny Anstalt, however, is more than an architectural accomplishment for the country. It hopes to end a human rights issue that has haunted the island nation for decades.
Nuuk is located near the southern tip of Greenland, a former Danish colony that straddles the Arctic circle. With only 56,000 residents, it is the least-densely populated country in the world.
Across this unfenced wilderness there are just six prisons with a collective capacity for 154 prisoners. Greenland runs a uniquely “open” prison system, with many inmates allowed to leave the premises to work, study, or even go hunting, before returning at night. As a consequence, none of the existing penitentiaries can accommodate high-security inmates, and this has long presented Greenland with a problem.
Many Nordic countries have famously low crime rates: in Iceland, for example, there were only three homicides in 2015, according to European Union statistics. But in Greenland, the proportion of citizens sent to prison is about three times higher than in the rest of the Nordic region, according to the Danish Prison and Probation Service.
Keep reading on CNN.com