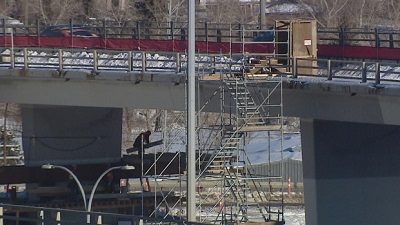 A look at the Crowchild bridge retrofit project in Calgary

The Crowchild Trail bridge was built in the mid-1960s, when about 300,000 people lived in Calgary.

Today, the city’s population is pushing 1.3 million citizens — not to mention visitors and commuters from burgeoning bedroom communities on all sides — most of whom rely on their cars for getting around.

It doesn’t take a traffic engineer to realize the situation isn’t sustainable. Any rush-hour traveller would tell you as much, in between cursing the notoriously short and confusing merge lanes.

And so, the city has undertaken a multi-year $87-million project to retrofit this half-century-old piece of infrastructure to meet the needs of Calgarians for the next 50 years, and likely beyond.

The list of planned upgrades for the bridge (and sections of Crowchild Trail just to the north and south) is as long and complicated as its on and off ramps.

But one key component is widening the bridge deck.

The plan is to add an average of four metres on each side, and as much as 6.5 metres at some points, in order to accommodate an additional northbound lane and southbound lane.

But how do you go about expanding a 50-year-old structure — without disturbing the environmentally sensitive riverbed below or closing any lanes during Calgarians’ regular work hours?

With a lot of careful planning, and evening and weekend work.

“Nothing to this scale, anyway, has been done in the city.”

As much work as you’ll see on the bridge deck itself, there’s even more going on below.