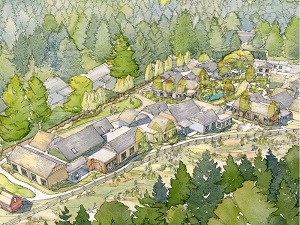 As reported in the National Post, Canada’s first community designed specifically for people with dementia is opening next year in Langley.

It’s called The Village. Comprised of six, single-storey cottage-style homes and a community centre, The Village will be home to 78 people with dementia, an umbrella term that includes people suffering from Alzheimer’s and other degenerative brain diseases associated with aging. Care will be provided by 72 specially trained staff.

Project leader Elroy Jespersen said The Village’s design was inspired by Hogeweyk, the world’s first dementia village, in The Netherlands.

Jespersen, the vice-president of special projects for Verve Senior Living, said The Village builds on the other assisted- and extended-care communities he has developed during the past 29 years.

“We’ve really designed and tried to build communities where people could be independent and live their own life their way,” Jespersen said. “And by and large we were able to do that — with the one exception when somebody developed dementia and they could no longer live safely in our communities. We thought we should add another piece to that to allow them to stay within, if you will, our ‘family’ of communities.”

The Village is at 3920 198th St., which is known as the Old Bradshaw Elementary School site.

Groundbreaking is Wednesday, and Jesperson said he expects The Village to be finished by April 2019.