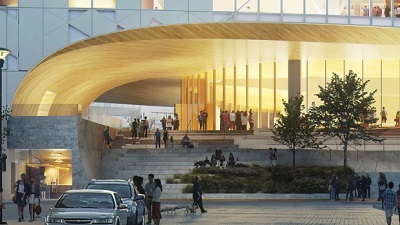 They might be having trouble finding tenants, but thanks to a spate of critically-acclaimed buildings designed by some of the world’s leading star architects — or starchitects — Calgary is growing into a destination for design lovers.

That’s the word from University of Calgary Associate Professor Jason Johnson, who appeared on The Calgary Eyeopener Wednesday to talk about the Calgary Public Library’s new central branch being named by Architectural Digest as one of the 12 new buildings to watch for in 2018.

While Johnson had plenty to praise about the innovative design work of Norway’s Snohetta and Calgary’s DIALOG — the firms behind the new library — he also pointed out the library is just one of several new Calgary buildings to make an international splash over the past few years.

“Within the five block radius of where this building is going up, we’ve got buildings by three architects that are on this list,” said Johnson.

“We’ve got the new Telus Sky (Building) architects, which is by the Bjarke Ingles group (also in collaboration with DIALOG),” Johnson said.

“They’re also on this (Architectural Digest) list with another building (the ARC Power Plant project in Copenhagen, Denmark). And the recently completed Studio Bell, which I believe is on one of the lists (and is designed) by Allied Works out of Portland.”