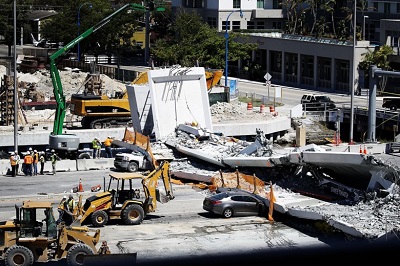 As reported on Slate.com, it was to be a showcase of advanced bridge technology, a centerpiece of urban development in Miami-Dade County. It was equipped with titanium dioxide–impregnated self-cleaning concrete that would always sparkle white in the Florida sun. It was designed to withstand a Category 5 hurricane. And it was supposed to last 100 years.

But last week, the FIU-Sweetwater UniversityCity Bridge failed catastrophically during construction, crushing rows of cars stopped at a red light on a busy thoroughfare. Six people were killed and 10 injured.

Failures like this invoke special horror because they are so rare, which is the only solace to be had from the tragedy. As pedestrians and motorists, we take infrastructure reliability for granted in a way that we don’t with our consumer goods. We expect cars and computers to crash, and conceptually, we can cope with that, even when the consequences are dire. When bridges and tunnels implode, though, it seems like things are truly out of our hands, the sky almost literally falling on our heads.

So it is a tad disconcerting to learn that the technology and techniques used in the University City Bridge may be coming to a neighborhood near you, if they haven’t already. The bridge was a product of something called “accelerated bridge construction,” or ABC, a technique of fast-tracked prefabricated building that has strong political backing at both the state and federal levels. More than 1,000 bridges have been built with it, and Florida International University is one of the leading research centers in this kind of engineering, an irony not lost on some commentators.

To be fair, the university did not design or build the bridge, as it hastened to point out. And neither the designer nor the builder has a spotless record. With wreckage left to be cleared, it will be a while before the National Transportation Safety Board can pinpoint the exact cause of the disaster.

What we can say is that when complex technological systems fail, usually no single factor is to blame. In her study of the Challenger Space Shuttle disaster, the sociologist Diane Vaughan noted a phenomenon she called the “normalization of deviance,” an acceptance of assumptions and shortcuts that over time incrementally piles on risk until, like compounding interest on debt, a kind of technological bill suddenly becomes due.