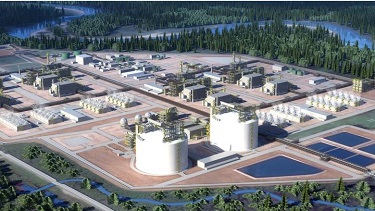 The chief executive of the LNG Canada project on British Columbia’s northern coast said on Tuesday that the company was committed to starting construction on the $40 billion liquefied natural gas export project this year.

An investment decision on the terminal in Kitimat, B.C., was delayed in 2016, due to sagging oil prices that hit cash flows, along with an unfavourable supply-demand outlook, but remains on track for 2018, Andy Calitz said at an LNG conference on Tuesday.

“It didn’t make sense in July 2016,” he said. “When [our stakeholders] asked the inevitable question, when will you reconsider the FID? Our answer was: We will be in construction in 2018. I reaffirm that commitment today.”

Calitz later told reporters that a trade spat over imported fabricated industrial steel components (FISC) was no longer an issue for the project and would not have any impact on an investment decision by the joint venture partners.

As word of Calitz’s comments spread, LNG Canada issued a statement, reiterating the fact that no final investment decision has yet been made.

“LNG Canada is currently preparing to submit a Decision Support Package for review by our Joint Venture Participants (JVPs) later this year. However, the exact date for an FID is up to the JVPs to make,” said director of external relations Susannah Pierce.

B.C. Energy Minister Michelle Mungall made the same observation but said the government was “very encouraged” by Calitz’s comments.