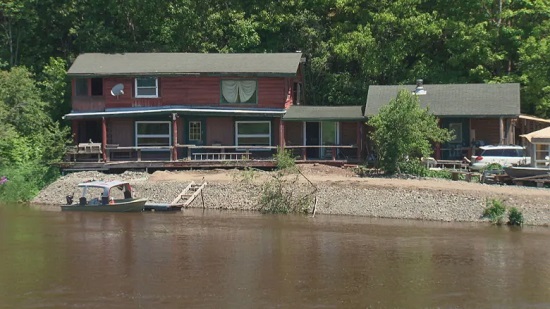 ‘Like living in hell’: N.S. couple gets $600K from province after 11-year battle

An Antigonish County couple’s 11-year battle over property damage related to the twinning of Highway 104 has finally come to a close after they received nearly $600,000 in compensation from the province.

Jane DeWolfe and Kevin Partridge have lived in their log home along the bank of the South River in Lower South River, N.S., for 40 years.

They swam in the river, taught their kids to swim in it, fished and boated in it. They’ve watched cranes raise their young on the riverbank, and when the turtles climb ashore to dig holes in their gravel driveway to lay eggs in, they don’t mind one bit.

But in October 2011, the river got too close for comfort. After a heavy rainstorm, water flooded their home and damaged or washed away equipment and supplies for Partridge’s log home restoration business, which operated from the property.

The river had never flooded their property before. But things were not as they used to be.

Earlier that year, the province had expropriated a small portion of their land to begin work on a temporary bridge to support the twinning of nearby Highway 104. Crews filled in the marshy area opposite Partridge and DeWolfe’s home, removing the natural buffer for rising water levels.

During heavy rains, the water had nowhere to go except up over the bank by the couple’s home.