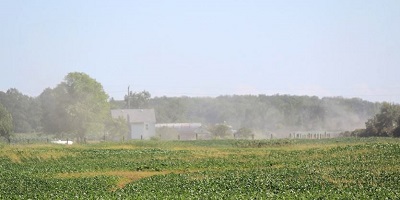 Two families are taking legal action related to a plume of construction dust from a Niagara Region Wind Farm construction site in 2015 that they say has left them with physical and mental health issues, as well as property damage and monetary losses.

Raymond Sherman and Alexandra Karatopis Sherman, along with their three children, and Stefanos Karatopis — the brother of Alexandra — are named as plaintiffs in court documents that were originally filed last summer, about two years after the July 23, 2015 incident. A list of 25 defendants, including 10 individuals whose identities are unknown, are named in the notice, ranging from stakeholders in the Niagara Region Wind Farm, to construction companies and employees to the Township of West Lincoln and Region of Niagara.

In court documents, the plaintiffs allege workers at the wind farm on Regional Road 20 in West Lincoln were discharging a construction dust which made its way into the house. While the parents were not home, the Sherman children were and the documents allege they had difficulty breathing and their eyes were burning.

Karatopis attended the property after receiving a phone call from the children and arrived at the same time as Alexandra, and the plaintiffs claim the dumping of cement dust was “generating large clouds of dust that were being blown by the wind directly into the Sherman resident”.

Court documents say the pair “discovered that the interior was filled with dust and the children were coughing non-stop and complaining that their eyes were burning. Almost immediately, Ms. Sherman and Mr. Karatopis started coughing and experiencing eye burn themselves.”

The family closed the windows of their home, and they retreated outdoors, with Alexandra confronting the construction crew, alleging that several workers “refused to stop discharging cement dust,” citing having permits to conduct the work.