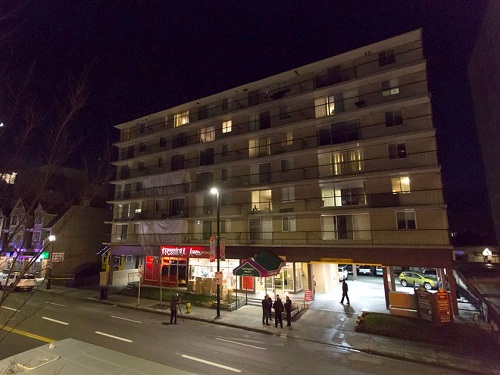 The landlord of a Kensington apartment block says it’s an “absolute lie” that the building was in danger of imminent collapse and needed to be rapidly evacuated.

The 125 residents of Kensington Manor, at 321 10th St. N.W., have yet to get their belongings nearly two weeks after the crisis.

Don Lowe, president of National Equity Management Ltd., a property management company, said he understood there was no pressing emergency on Nov. 23 and asked for more time to vacate the building.

But the City of Calgary disagrees, saying it had had no choice but to hastily remove the residents because the building was “in serious shape.”

Meanwhile, advocacy group Renters Action Movement says it’s heard from many residents struggling to get information from the property manager and not being able to afford an unexpected move.

The property management company started working with the city and an engineer after identifying a problem in the summer, Lowe said.

On Nov. 23, he met with the city to receive the engineer’s findings, who Lowe said described “very clearly that there was no immediate danger.”

The subsequent city order to evacuate that day by 11 p.m. was a surprise, he said.

“Knocked right off our feet. Totally unexpected. The engineer pleads for at least 24 hrs. No go,” Lowe said in the email.

“Never did we expect such a strict order.”

Lowe said he co-operated fully and wanted to keep his tenants safe, but felt word of risk of collapse told to the public and media were overblown.