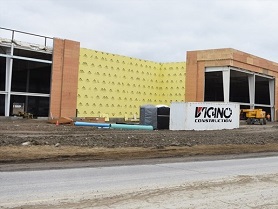 It’s hard not to notice the giant 112,000-square-foot structure being erected in the Major Bennett Industrial Park in Peterborough.

The huge building will soon be home to Kawartha Metals and Steelworks Design and become a home for industrial businesses in one of the city’s main manufacturing hubs.

Tom Elliott, president of Kawartha Metals, says he’s bringing together his three locations, two in Peterborough and one in Port Hope, to put them on one site.

Elliott says the company’s main location on Harper Road has been there since 2006 and currently employs 50 people to sell metal sheets, tubes and other construction products.

By bringing all three locations together, Elliott says it reduces transportation, inventory and management costs.

The cost of the new building is worth around $10 million.

Elliott says while there are costs to moving the new location means his business will be right beside Highway 115 which will further reduce expenses.

One of the reasons for the move, he notes, is that the one location is on a city-owned property. That property has been identified as a potential spot to move the city’s bus depot to.

But due to the move, there’s also room for co-operation with other companies.