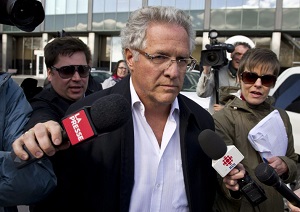 JOLIETTE, Que. — The jury in the trial of well-known Quebec construction magnate, Tony Accurso, who was accused of breach of trust, needed less than 24 hours of deliberations to come back with an acquittal Tuesday.

Defence lawyer Marc Labelle said in response to the verdict, “the people have spoken.”

Accurso was accused of giving a $300,000 cheque and other gifts to the late mayor of Mascouche, Que., in exchange for contracts for his construction company, which used to be one of the biggest in the province.

He was initially charged with six counts in 2012 but the charges were reduced to a single count of breach of trust in the trial that began Jan. 15. at the courthouse in Joliette, Que., about 75 kilometres north of Montreal.

Accurso’s name has come up often in connection with the problems associated with Quebec’s construction industry.

The former construction boss has admitted to entertaining union leaders and politicians on his luxury yacht, and he was a star witnesses at Quebec’s corruption inquiry into the construction industry, known as the Charbonneau commission.

Despite Tuesday’s acquittal, Accurso is scheduled back in court in May to stand trial for allegedly taking part in a kickback scheme tied to construction contracts in the city of Laval, just north of Montreal.